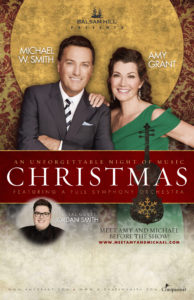 With multiple sellout crowds celebrating the season with them last year, Amy Grant and Michael W. Smith joint Christmas tours have become some of the most anticipated holiday events of the season. Combining for a vast collection of critically-acclaimed holiday albums between them, the 2017 Christmas tour will showcase selections spanning the artists’ expansive Christmas repertoires, including their most recent releases, Grant’s Tennessee Christmas, Michael W. Smith’s The Spirit of Christmas and Jordan Smith’s ’Tis The Season.

“I started looking forward to this year’s tour after the final encore of last year’s tour!” exclaims Michael W. Smith. “Performing with Amy and Jordan – in front of a full Symphony Orchestra – is about as good as it gets for me!”

“Michael, Jordan and I have been looking forward to touring together again all year!” confirms Grant. “We had so much fun together last year and it felt like our creative gifts complimented one another in a unique way.

“As we started to plan the show, it was our goal to enhance people’s experience of the Christmas season by providing them a night of exquisite music and a message of hope,” continues Grant. “We are especially thrilled to be partnering with Balsam Hill this year and incorporating some of their beautiful pieces into our production. Creativity happens on many different levels and similarly to the music Michael, Jordan and I have recorded for the holidays, Balsam Hill’s products exists to add beauty and magic to the Christmas season.”

“I’m so looking forward to hitting the road again this year with Michael and Amy!” adds Jordan Smith. “It is always an honor to share the stage with these two legendary performers who are also such special people. This show has become one of my favorite Christmas traditions!”

In addition to the performance, and in support of their longstanding relationship with Compassion International, Michael and Amy are exclusively meeting with as many as 200 people in each city who sponsor a child through the organization prior to the concert and through the website www.meetamyandmichael.com. This “Compassion Meet & Greet” is an opportunity to learn more about the Compassion International’s child sponsorship experience and will include a photo opportunity with the artists. (Tickets to each concert must be purchased separately through the event’s normal ticketing outlets.)

“Amy and I have both sponsored children through Compassion International literally for decades,” reflects Michael. “So, I’m especially excited that we are using our time before the show to meet people who sponsor Compassion children. It seems like such a great opportunity – especially this time of year.

“Amy has a song that says, ‘It’s Going To Be A Christmas To Remember.’ That’s our goal with this night,” continues Michael. “I hope we create a memory for everyone that attends and, at the same time, we impact the lives of some very special children all over the world.”

Recently inducted into the Music City Walk of Fame in recognition of her significant contributions to Nashville and its musical heritage, Grant released Tennessee Christmas last year, marking her first all-new holiday album in nearly 20 years. With over six million Christmas records sold, her latest holiday offering includes a blend of heartfelt originals and Grant’s own spin on popular Yuletide classics, seamlessly weaving together the joy, love, laughter and even grief this season brings.

Jordan Smith released his first-ever Christmas album, ’Tis The Season, last year. The holiday recording followed his debut album Something Beautiful, which reached No. 2 on the Billboard 200, the highest ranking on the chart by any winner of a television singing competition in almost five years, making Smith the best-selling artist in the history of “The Voice.”

*All dates and venues are subject to change without notice

About Amy Grant:
Amy Grant’s career spans more than 30 years and stretches from her roots in gospel into becoming an iconic pop star, songwriter, television personality and philanthropist. With three multi-platinum albums, six platinum albums and four gold albums, her total career album sales have exceeded 30 million. Grant’s chart success has been consistent throughout her career with six No. 1 hits, 10 Top 40 pop singles, 17 Top 40 Adult Contemporary tracks and multiple Contemporary Christian chart-toppers. In addition to her six GRAMMY® Awards, Grant has earned 26 Dove Awards (including four Artist of the Year Awards) and has been awarded a star on the Hollywood Walk of Fame. Conventional wisdom has it that Grant put Contemporary Christian Music on the map becoming the first Contemporary Christian artist to have a platinum record, the first to hit No. 1 on the Pop charts and the first to perform at the GRAMMY® Awards. With that, her legacy as one of the most influential artists of the past four decades is assured. In April 2015, Grant celebrated the 25th anniversary of her iconic hit “Baby Baby” with a worldwide release of the song featuring pop sensation Tori Kelly and released Tennessee Christmas in 2016, marking her first all-new holiday album in nearly 20 years.

Get Connected with Amy Grant:
www.amygrant.com

About Michael W. Smith:
Michael W. Smith is an acclaimed singer, songwriter and musician who has sold more than 15 million albums, achieved 32 No. 1 songs, received 2x RIAA Multi-Platinum, 6 Platinum and 16 Gold certified albums, earned three GRAMMY® Awards, one American Music Award and 45 Dove Awards. Amassing an in-depth catalog of achievements, Smith was honored at ASCAP’s 100th Anniversary for his groundbreaking career and significant influence in music. He performed at Former First Lady Barbara Bush’s 90th birthday celebration, had the privilege to join Former President Clinton, U.S. Secretary of Homeland Security Jeh Johnson and others in remembering victims in the 20th Anniversary of the Oklahoma City attacks, was appointed by the White House as Vice Chair for the President’s Council on service and civic participation and was the featured performer at the 2015 USO Gala where he was recognized as a USO veteran. In addition to the international impact he has had through multiple global tours, he has written and composed various scored film projects, has authored 12 books, has acted in assorted motion pictures and has been featured by numerous national media outlets. He founded, and actively supports, the teen club Rocketown – a nonprofit outreach for teens, providing opportunities in arts, music, sports and mentoring programs. This year also marks the 26th anniversary in partnership with Compassion International, seeing more than seventy thousand families’ and children’s lives changed, around the world.

About Jordan Smith:
Jordan Smith’s much anticipated debut album, Something Beautiful [LightWorkers Media/Republic Records], is available now everywhere. Throughout the album, his undeniable delivery and instantly recognizable range drives both original songs and cover tracks produced by legends such as GRAMMY® Award winning producer David Foster [Céline Dion, Michael Bublé, Josh Groban] and modern hit maker Stephan Moccio [The Weeknd, Ellie Goulding, Miley Cyrus]. The 23-year-old from Harlan, KY, Jordan Smith stands out as the highest-selling artist to ever emerge from NBC’s EMMY AWARD®-winning “The Voice.” In less than six months, he sold over 1 million singles and made Voice history by landing eight songs in the iTunes Top 10—the first artist from any season to hit the iTunes Top 10 every single week of the Live Rounds. Of the eight songs that went Top 10 on iTunes, six hit Top 3, and three captured No. 1 on iTunes, all of which knocked Adele off the top spot! His first holiday album, ‘Tis The Season, is available now.

Get Connected with Jordan Smith:
www.jordansmithofficial.com

Founded ten years ago in Redwood City, Calif., Balsam Hill is committed to creating the best Christmas trees on the market. Founder Thomas Harman was inspired to start Balsam Hill by a family member who was allergic to live trees but wanted to create a festive atmosphere in his home during the holidays. When Thomas’ search for a lifelike artificial Christmas tree came up empty-handed, our mission was born to develop the most realistic and luxurious artificial trees. To accomplish this mission, our designers carefully craft trees to mimic nature using site visits and cuttings from live trees as a guide. Balsam Hill holds several patented and trademarked technology that brings the holidays to life including ultra-realistic True Needle™ branches, unique Color+Clear™ or Candlelight™ LED lights, and innovative Flip Tree™ technology. For more information visit the company’s website at http://www.balsamhill.com/.

About Compassion International:
Founded in 1952, Compassion International is a Christian child development organization that works to release children from poverty in Jesus’ name. Compassion revolutionized the fight against global poverty by working exclusively with the Church to lift children out of spiritual, economic, social and physical poverty. Compassion partners with more than 6,700 churches in 25 countries to deliver its holistic child development program to over 1.8 million babies, children and young adults. It is the only child sponsorship program to be validated through independent, empirical research.