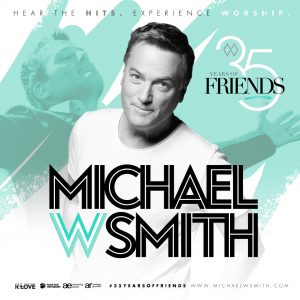 Amassing an in-depth catalog of achievements, Smith was recently honored with a star- studded tribute concert to celebrate his 35 #1 songs at Bridgestone Arena by a myriad of legendary performers  including: Amy Grant, Vince Gill, Randy Travis, The Oak Ridge Boys, CeCe Winans, Jordin Sparks, Rascal Flatts, Wynonna and many more.

Smith says, “I’m really excited about the 35 Years of Friends Tour this fall. We had an event this spring, here in Nashville, where 56 of my friends and fellow artists came together to celebrate my 35 #1’s and the 35th Anniversary of FRIENDS. It was an amazing night – and, for me, brought back some memories of some songs I hadn’t thought of for quite a while!  It’s going to be a blast dusting off some songs I haven’t done in concert for a long time. It will be a night full of all the hits – and, of course, I’m excited to lead worship every night. I can’t wait to see you there!”

The 35 Years of Friends Tour is exclusively produced by Awakening Events, and will provide fans the opportunity to hear

these hits and experience worship drawn from Smiths’ recordings and worship anthems from across his career including a live performance of “Friends”. As Smith was designing this unique show, unlike any tour he has embarked on before, it was decided that he would be his own “opening act,” to spend as much time with the crowd as he could.  Tickets will go on sale this Friday, 6/21 at 10:00 AM local time. More information can be found at michaelwsmith.com or awakeningevents.com.

*all dates subject to change

Michael W. Smith has been releasing new music regularly and performing around the world to sold-out crowds for the last 35+ years. During his storied career, he’s written over 35 #1 songs, been honored with three GRAMMY® Awards and 45 Dove Awards, one American Music Award, was inducted into the Gospel Music Hall of Fame and has sold more than 15 million albums. His most recent USA Today, Yahoo! Music and Billboard-acclaimed studio album A Million Lights and Parade, Good Morning America-featured and GRAMMY nominated live worship album Surrounded have together become his 30th and 31st Top 10 hits on Billboard’s Top Christian Albums chart, more than any other solo artist in history. He’s also given back to the global community. Smith has raised funds to battle AIDS in Africa; started Rocketown, a safe haven for young people in Tennessee to meet and find hope; and has helped more than 70,000 children through Compassion International. He has also written several bestselling books, including Old Enough To Know and Friends Are Friends Forever. For more information, visit www.michaelwsmith.com.

About Awakening Events:
Awakening Events produces over 250 Contemporary Christian concerts and events nationwide in and is consistently ranked in Pollstar’s “Worldwide – Top 50 Promoter” list each year, reaching as high as 9th in North America, and top 15 in the world.  Awakening Events, based in Greenbrier, Arkansas is dedicated to all aspects of live Contemporary Christian music touring, including but not limited to, planning, logistics, creative, marketing and helping create the ultimate fan experience.  For more info visit:  www.AwakeningEvents.com