Multi-Platinum, three-time Grammy® Award winning artist, best-selling author and acclaimed actor Michael W. Smith launches Nurturing Steps™, a new infant and toddler series with a simple mission to provide parents and grandparents with music and books to enliven a young child’s journey with hope and faith through song and storytelling. 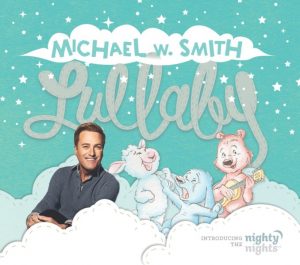 The first new album, Lullaby, and book, Nighty Night and Good Night, from Nurturing Steps release May 4 and May 8 through The Fuel Music and Zonderkidz™ respectfully. These projects also mark the first-ever children’s album and book by Michael, each crafted in collaboration with renowned VeggieTales co-creator Mike Nawrocki. The book is available now to preorder through NurturingSteps.com or favorite online retailers.

“One of the greatest joys of my life is being a parent and a grandparent,” says Michael, the father of five, who is called “G-Daddy” by his 14 grandkids. “I want to serve the next generation well. That’s why I created Nurturing Steps, to provide stories and songs that will help shape the faith of our newest generation.”

For Lullaby, Michael meaningfully arranges his worldwide hits like “Agnus Dei” and “Friends” along with new ballads “No More Crying,” “Sleep Tight” and more, and leads an audio bedtime drama for young children with the Nighty Night characters. The Nighty Nights also join Michael as his band with Bear on Guitar, Lamby on Keys and Sleepy Puppy on Upright Base.

In Nighty Night and Good Night, members of the Nighty Night band are further called upon to help their friend, Ben, as he tries to fall asleep. After bedtime prayers and some going-to-sleep rituals are done, a lullaby sung by the band of animals including Bear, Sleepy Puppy and Lamby finally does the trick. 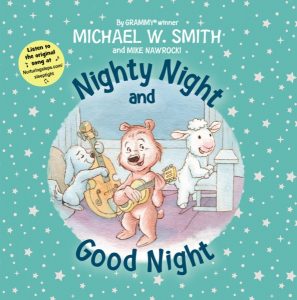 derful memories of reading, singing and praying with my children before bed,” says Nawrocki. “It can be a sacred time with our little ones, and I’m thrilled to be able to partner with Michael to create stories that parents and grandparents can use to help pass important values on to their children and grandchildren.”

Known as one of the most influential Christian music artists in the world, Michael recently performed “A Million Lights” and “Surrounded (Fight My Battles)” from his 5-star-aclaimed albums A Million Lights and Surrounded respectively on ABC-TV’s Good Morning America. He has also recently been featured by USA Today, Billboard, TBN, FOX News, CBN, Parade, Yahoo! Music and many more outlets as these albums became his 30th and 31st Top 10 hits on Billboard’s Top Christian Albums chart, more than any other solo artist in history.

Taking the new music and fan favorites from his extensive repertoire on the road internationally, Michael begins his “Israel Tour 2018” next week before continuing his “Sounded By A Million Lights World Tour” that is traversing the eastern half of the US this spring prior to wrapping up May 13 in Joplin, MO. Already seeing packed venues, this full-production tour is being presented by Compassion International and features special guest Nathan Tasker.

Even in the mi 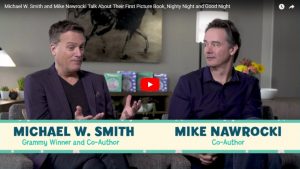 dst of his busy schedule, Michael makes time for his children and grandchildren and treasures the special moments he has to speak into their lives.

“I hope they see these books and this music as a gift to them, to remember that they are loved as they fall asleep every night,” says Michael.

Following the release of Lullaby and Nighty Night and Good Night, additional Nurturing Steps titles releasing this fall will be announced.