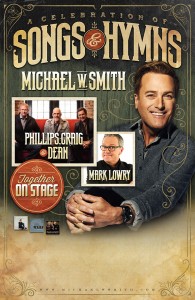 Nashville, Tenn. (May 22, 2015) – Beginning September 22, GRAMMY® award-winning artist Michael W. Smith will embark on a nightly concert hymns tour, bringing his hits and famous church classics alongside comedian Mark Lowry and longtime trio Phillips, Craig, and Dean (PCD). The tour will run through the month of September, beginning in Bemidji, Minn. and concluding in Reading, Pa.

In 2014, Smith released his very first traditional hymns album, partnering with the Cracker Barrel Old Country Store® for its release. The best-selling Hymns album won the 2014 Dove Awards for “Inspirational Album of the Year” and includes inspirational songs that he remembers singing in church when young.

“This tour really is a bit of a dream come true for me,” Smith shares. “I have such deep respect for Randy, Shawn and Dan (PCD) and I’ve always been a fan of Mark Lowry. Sharing the stage and performing the classic Hymns of the church will be such a unique and great experience. I’m really, really looking forward to this tour.”

After a successful Alaska cruise tour in 2014 featuring PCD, Smith decided to connect with PCD a second time. In planning the 2014 nightly concerts, the artists decided that it might be fun to do a night of all hymns. So – with no formal rehearsal, they made a set list, took the stage together, and sang classics for more than an hour. It was decided that very night that the two artists would set out on another hymnal tour, but this time with the addition of Lowry.

Lowry’s performance will bring a special element to the tour. Not only known for his comedic antics, Lowry was raised in the church and had the opportunity to sing with Bill Gaither for many years. “I’m so excited that Smitty, PCD and I are going to get to travel to a bunch of cities this fall and perform all ‘hims.'” Mark comments, “I guess we’ll perform all ‘hers’ next year … sorry ladies.”

Randy Phillips with PCD states, “Michael W. Smith sings songs that draw my heart closer to God. Mark Lowry, through his unique humor, helps me not to take myself too seriously. As Phillips, Craig and Dean enter our 25th year together, it is indeed an honor to be on stage with men who have created such a legacy.”

Additional information and tickets are available at https://michaelwsmith.com.

About Michael W. Smith:
Michael W. Smith is an acclaimed singer, songwriter, and musician who has sold more than 15 million albums, achieved 32 No. 1 songs, earned three GRAMMY® Awards, one American Music Award, and more than 40 Dove Awards. Most recently, in honor of ASCAP’s 100th Anniversary, Smith, along with Amy Grant, was honored as “a cornerstone of Christian music,” for his groundbreaking career and significant influence on the genre. Also in 2014, Smith was named Philanthropist of the Year by the Nashville Chapter of the Association of Fundraising Professionals (AFP) and honored by the Nashville Association of Talent Directors (NATD) for his impact on the Nashville entertainment industry. Throughout his career, the Contemporary Christian Music artist has had the opportunity to sing for several Presidents and national leaders. He actively supports the teen club Rocketown, Compassion International, and Samaritan’s Purse, the ministry headed by Franklin Graham. Michael and his wife Debbie live in Middle Tennessee, where they raised their five children. In 2014, Smith released Hymns, his first-ever classic album featuring church favorites available exclusively at all Cracker Barrel Old Country Store® locations and CrackerBarrel.com, as well as his first studio worship album since 2008, Sovereign, which took a Top 10 spot on the Billboard 200, as well as the No. 1 spot on Billboard’s Christian Albums Chart. His fourth career Christmas album, Michael W. Smith & Friends: The Spirit of Christmas, released during the fall of 2014 and received critical acclaim from The New York Times, USA Today and more. Featuring Vince Gill, Lady Antebellum, Little Big Town, Martina McBride, Amy Grant, Carrie Underwood, Jennifer Nettles, Bono and Michael McDonald, the project was one of the top-selling Christmas albums of the season. For more information, visit www.michaelwsmith.com.

About Phillips, Craig and Dean:
Since the group was formed more than 20 years ago, Phillips, Craig & Dean has achieved remarkable status in the Christian music industry. They released their 15th album, Above It All, November 10th, have produced 24 No. 1 radio hits, sold almost three million records, and have won three GMA Dove Awards. Their major hits have received national attention with “Revelation Song” staying at No. 1 for a record-breaking 17 weeks, “Crucified with Christ” named Inspiration Song of the Year by CCM Magazine, “Saved The Day” played during a nationally televised game of the Texas Rangers, and “Shine On Us” being the theme song for the National Day of Prayer’s 50th anniversary. Phillips, Craig and Dean remain an active touring act, which has included appearances at National Religious Broadcasters and Christian Booksellers Association conventions and Promise Keepers events. The group still maintains their moratorium on Saturday night travel due to their commitments as full-time pastors at their home churches in Austin, TX, St. Louis, Missouri and Carrollton, TX.

About Mark Lowry:
Mark Lowry is known and loved around the world as a trusted voice in the realm of gospel music and beyond. With four decades in the entertainment industry, Lowry is a singer, storyteller, humorist, author and songwriter, whose lyric to “Mary Did You Know?” resulted in one of the most loved modern Christmas songs of this century.  This captivating song, which he co-wrote with Buddy Greene, has been recorded more than 400 times by artists from every genre including: Reba McEntire, Cee Lo Green, Clay Aiken, Michael English, Kenny Rogers, Wynonna Judd, The Gaither Vocal Band and a long list of others.  Lowry has spent more than 20 collective years as the baritone singer for the GRAMMY ® winning Gaither Vocal Band and serves as the sidesplitting comedic sidekick for Bill Gaither through live concert tours and the best-selling Gaither Homecoming video series and television airings (now more than 150 volumes strong).  A deep thinker and student of theology with an outrageous sense of humor (for which he often credits his diagnosis with Attention Deficit Disorder), Lowry’s life work includes a long list of recordings and DVDs reflecting a wide range of influences, including: Mark Lowry On Broadway, Mark Lowry Goes To Hollywood, Life Gets Loud, I Love To Tell the Story (his first all-hymns recording), Unplugged and Unplanned, Whatcha Need and most recently, Unforgettable Classics. Lowry was recently inducted into the Gospel Music Association Hall of Fame, which in his words, “took my breath away.”