Smith to Record Worship Forever at Allen Arena with Amy Grant, Matt Redman, Tauren Wells and more in Front of a Live Audience on July 12, 2021 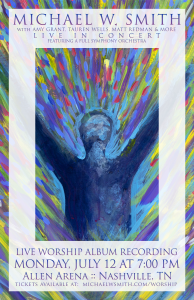 Nashville, Tenn. (June 1, 2021) —  Iconic multi-platinum, singer and songwriter Michael W. Smith announced he will be re-recording and re-releasing his #1 highest-selling album of all time, Worship, in honor of the 20th anniversary of the album’s release on September 11, 2001. Worship Forever will re-imagine the album from start to finish, this time, with a full symphony orchestra.

Worship Forever will be recorded in front of a live audience at Allen Arena on July 12, 2021 in Nashville, TN and released on September 10, 2021. Tickets for this memorable night go on sale today, Tuesday June 1, 2021, and are available at MichaelWSmith.com/worship. The one-of-a-kind evening will also be released as a television event later this year.

Originally released on September 11, 2001, Worship offered hope during a time of despair and mourning.

Smith says, “The Worship record was a special one for me.  From the recording live in Lakeland, Florida – to the release on 9/11– the day our nation was attacked.  I’ve seen God use those songs and that music in ways I could have never dreamed.  I’m so excited, now, to be reimagining this record – start to finish – with a full Symphony Orchestra.  It’s going to be a special recording and night.”

Michael W. Smith has been releasing new music regularly and performing around the world to sold-out crowds for the last 35+ years. During his storied career, he’s written and recorded over 36 No. 1 songs, been honored with three GRAMMY® Awards and 45 Dove Awards, one American Music Award, was inducted into the Gospel Music Hall of Fame and has sold more than 15 million albums. Amassing an in-depth catalog of achievements, Smith was also recently honored with a star-studded tribute concert in Nashville, TN to celebrate his 35 No. 1s, by a myriad of legendary performers. His recent USA Today, Yahoo! Music and Billboard-acclaimed studio album A Million Lights and Parade, Good Morning America-featured and GRAMMY nominated live worship album Surrounded have together become his 30th and 31st Top 10 hits on Billboard’s Top Christian Albums chart, more than any other solo artist in history. His most recent album STILL Vol. 1, is an atmospheric listening experience of improvisational music coupled with inspirational scriptures. More than just an outstanding songwriter and performer, Smith has given back to the global community throughout his career. Smith has raised funds to battle AIDS in Africa, started Rocketown, a safe haven for young people in Tennessee to meet and find hope; and has helped more than 70,000 children through Compassion International. He has also written several bestselling books, including Old Enough To Know and Friends Are Friends Forever.