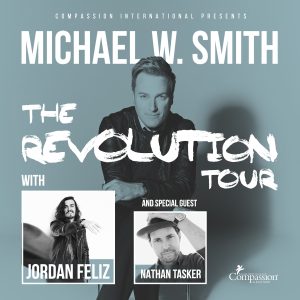 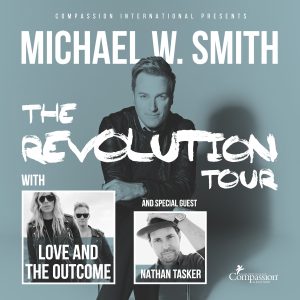 Tour Begins March 30, Set to Hit 20 Cities Across the U.S. This Spring

NASHVILLE, Tenn – Jan. 24, 2017 — Three-time Grammy® Award winner and multi-platinum recording artist Michael W. Smith is set to launch The Revolution Tour, featuring Dove Award-winning New Artist of the Year Jordan Feliz and special guest Nathan Tasker (pop duo Love & The Outcome will appear instead of Feliz on the first two weeks of the tour). Presented by Compassion International, the spring tour is set to kick off March 30, in Omaha, NE., and will travel to approximately 20 cities across the U.S. before wrapping up on May 14, in Ashland, KY.

Sure to be a night full of favorites, The Revolution Tour will take concert attendees on a journey through Smith’s entire career. Presenting a rare evening of music from today and yesterday, Smith will perform hits from his extensive repertoire that spans more than 30 years and includes chart-topping singles such as “Place In This World,” “I Will Be Here For You,” “Healing Rain,” “Above All,” “Friends,” “Breathe,” “Agnus Dei” and many more.

The Revolution Tour is presented by Compassion International (www.compassion.com), the world’s leading authority in child sponsorship. Compassion revolutionized the fight against global poverty by equipping the Church to develop children out of poverty to become responsible and fulfilled Christian adults. Founded in 1952, Compassion now partners with more than 6,800 churches in 26 countries to release more than 1.7 million babies, children and young adults from poverty.

Tickets for The Revolution Tour dates are on sale now, and special VIP packages are available in most markets, featuring early entry (for general admission shows) or premium seating (for reserved shows), an artist Q & A session and a CD. For the most up-to-date list of concerts, please visit www.michaelwsmith.com/tour.
THE REVOLUTION TOUR – SPRING 2017
Dates, markets and venues subject to change without notice. Additional dates to be announced.

*These dates feature Love & The Outcome instead of Jordan Feliz

ABOUT MICHAEL W. SMITH
Michael W. Smith is an acclaimed singer, songwriter and musician who has sold more than 15 million albums, achieved 32 No. 1 songs, received 2x RIAA multi-platinum, 6 platinum and 16 gold-certified albums, earned three GRAMMY® Awards, one American Music Award and 45 Dove Awards. Amassing an in-depth catalog of achievements, Smith was honored at ASCAP’s 100th Anniversary for his groundbreaking career and significant influence in music. He performed at Former First Lady Barbara Bush’s 90th birthday celebration and also had the privilege to join Former President Clinton, U.S. Secretary of Homeland Security Jeh Johnson and others in remembering victims in the 20th Anniversary of the Oklahoma City attacks. Smith was appointed by the White House as Vice Chair for the President’s Council on service and civic participation and, most recently, was the featured performer at the 2015 USO Gala and recognized as a USO veteran. In addition to the international impact he has had through multiple global tours, he has written and composed various scored film projects, has authored 12 books, has acted in assorted motion pictures and has been featured by numerous national media outlets. He founded, and actively supports, the teen club Rocketown – a nonprofit outreach for teens, providing opportunities in arts, music, sports and mentoring programs. This year also marks the 25th anniversary in partnership with Compassion International, seeing more than seventy thousand families’ and children’s lives changed, around the world. For more information, visit www.michaelwsmith.com.

Dove Award-winning New Artist of the Year Jordan Feliz hails from Central California where he began his professional music career as the frontman for a mainstream rock band that generated a loyal fan base, record sales, and an active tour itinerary. Eventually, Feliz decided to strike out on his own as a solo Christian artist, and moved to Nashville to record his first EP as an independent artist. After signing with Centricity Music in 2015, Feliz released his first project, Beloved, in September of that year.  The project’s first single, “The River,” became a massive No. 1 single on several Billboard charts for multiple weeks. This success led to Feliz’s first full album, The River, that debuted at No. 4 on Billboard’s Christian Albums chart. The second single, “Never Too Far Gone,” became Feliz’s second No. 1 hit on Billboard’s Hot AC/CHR chart. This success led to a nomination for Breakout Single of the Year (“The River”) at the K-LOVE Awards in June 2016, followed by three Dove nominations for Song of the Year, Pop/Contemporary Recorded Song of the Year (“The River”) and New Artist of the Year, which he won Oct. 12, 2016 at the 47th Annual Dove Awards. For more information, visit www.jordanfeliz.com.

ABOUT LOVE & THE OUTCOME
Comprised of singer/songwriter Jodi King and bassist Chris Rademaker, Love & The Outcome’s debut self-titled LP released in 2013 and launched the duo as a mainstay act at Christian radio and on the touring circuit. While their first project was created out of personal hardships, the latest release, These Are The Days, takes the husband/wife duo into a more restful, yet celebratory, season. Beginning the album in California and wrapping in Nashville, These Are The Days was produced by Colin Munroe and GRAMMY® Award winner Seth Mosley. The powerhouse producers easily blend the new songs with a variety of influences that inspire both Chris and Jodi, including 80’s U2 and The Police, to Coldplay, Bleachers and Tame Impala, while lyrically taking the songs to a unique mix of worship, praise celebration and declaration. For more information, visit www.LoveAndTheOutcome.com.

Nathan Tasker is a storyteller with a deep desire to awaken hearts to a beautiful and believable Savior. The Australian singer-songwriter weaves his personal journey of sorrow, doubt, hope and expectation into songs that echo far beyond his life. His critically acclaimed debut album, Home, (produced by Charlie Peacock and Jason Ingram) was a knockout, spawning three No.1 radio singles in Australia and one No.1 radio single in the UK. To top that, the acoustic singer-songwriter, known for his exceptional live guitar skills and passionate vocals, was named 2011 Australian Artist of the Year by The Rock Across Australia. He spent time touring with established and well-loved acts Bebo Norman and Andrew Peterson, along with sell-out shows in the UK and Australia. Tasker’s latest album, Man On A Wire, was produced by Paul Moak (Third Day, Mat Kearney) and showcases his growth through a period of great sorrow and loss (Tasker & his wife lost her father to cancer in 2011, followed by the loss of twin babies that same year). In his live show, the singer-songwriter connects with his audiences not only through his timeless, guitar-driven pop songs and deeply thoughtful lyrics, but also through his open and engaging style that puts fans at ease and welcomes them into the stories he tells.