Two Honors for Michael W. Smith Last Week… Philanthropist of the Year; Honor from the Nashville Association of Talent Directors!

Two Honors for Michael W. Smith Last Week… Philanthropist of the Year; Honor from the Nashville Association of Talent Directors!

On National Philanthropy Day – November 5 – the Nashville Chapter of AFP named Smith Philanthropist of the Year based on his extensive work with Rocketown, which he founded in 1994. The first of its kind in the Southeast, Rocketown over the years has grown into a model example for Christian-based relational outreach programs across the country. Following the tragedy of Columbine in 1999, Rocketown’s board was inspired to grow the scope of programming and move to a central location in downtown Nashville. The current facility touts three stages for live entertainment, Middle Tennessee’s only indoor skatepark, The Hub snack bar, a recording studio and photography, art and dance studios. More than 800 teens from across the Middle Tennessee region participate in Rocketown programs each week. For more information, visit http://rocketown.com.

The 2014 Honorees were chosen by the NATD Board of Directors, under the leadership of President Steve Tolman of LogiCom. “Our honorees are from varying entertainment backgrounds and professions, and they have each brought their expertise, their commitment and their vision to ensure that Music City continues to flourish and grow,” Tolman said. 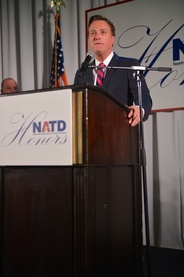 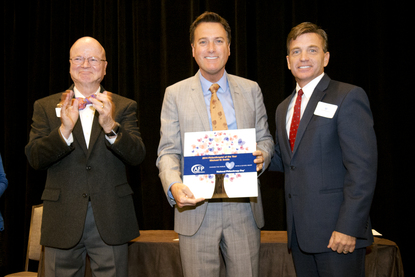 Smith is gearing up to launch the “The Spirit of Christmas Tour” in support of Michael W. Smith & Friends: The Spirit of Christmas, which features a plethora of A-list guests – including Vince Gill, Lady Antebellum, Little Big Town, Martina McBride, Amy Grant, Carrie Underwood, Jennifer Nettles, Bono and Michael McDonald.

The tour will kick off November 30 and will hit several cities in the U.S. and Canada. Partnering with Smith as the official tour sponsor is Cracker Barrel Old Country Store® and joining him on all tour dates is Dove Award-winner Rachael Lampa. In addition to “The Spirit of Christmas Tour,” Smith will co-headline three special events with long-time friend and fellow GRAMMY® winner Amy Grant. Teaming up in Dallas, Minneapolis and Atlanta, Smith and Grant will showcase their beloved Christmas set while performing alongside the full Symphony Orchestras.

Smith will also perform on the CMA Country Christmas special to air on ABC on Monday, December 1 at 8/7c. Smith will perform two tracks off of the album, his original song “All Is Well” with Carrie Underwood, and the beloved Christmas classic “Silent Night” with Little Big Town. For more information, visit cmaworld.com/cma-country-christmas.

About Michael W. Smith:
Michael W. Smith is an acclaimed singer, songwriter, and musician who has sold more than 15 million albums, achieved 28 No. 1 songs, earned three GRAMMY® Awards, one American Music Award, and more than 40 Dove Awards. Most recently, in honor of ASCAP’s 100th Anniversary, Smith, along with Amy Grant, was honored as “a cornerstone of Christian music,” for his groundbreaking career and significant influence on the genre. Throughout his career, the Contemporary Christian Music artist has had the opportunity to sing for several Presidents and national leaders. He actively supports the teen club Rocketown, Compassion International, and Samaritan’s Purse, the ministry headed by Franklin Graham. Michael and his wife Debbie live in Middle Tennessee, where they raised their five children. So far this year, Smith has released Hymns, his first-ever classic hymns album available exclusively at all Cracker Barrel Old Country Store® locations and CrackerBarrel.com, as well as his first studio worship album since 2008, Sovereign, which took a Top 10 spot on the Billboard 200, as well as the No. 1 spot on Billboard’s Christian Albums Chart. His fourth career Christmas album, Michael W. Smith & Friends: The Spirit of Christmas, is available now. For more information, visit www.michaelwsmith.com.

About The Association of Fundraising Professionals:
The Association of Fundraising Professionals (AFP) is an association of individuals responsible for generating philanthropic support for a wide variety of nonprofit, charitable organizations. The Nashville Chapter of AFP is one of five Chapters in the state of Tennessee. Established in 1981, the Nashville Chapter currently serves a membership of more than 120 area professionals, serving all of Middle Tennessee and parts of Southern Kentucky.
Founded in 1960, AFP (formerly the National Society of Fund Raising Executives) advances philanthropy through its more than 30,388 members in 198 chapters throughout the world.
AFP believes that to guarantee human freedom and social creativity, people must have the right to freely and voluntarily form organizations to meet perceived needs, advocate causes, and seek funds to support these activities.

About Nashville Association of Talent Directors:
NATD was founded in 1958 and professionally represents, directs, and promotes the entertainment industry through its members. Today those members generate more than 300 million dollars annually for Nashville-based artists. The organization not only serves as a forum for idea exchange among its members, it also serves as a vehicle for other facets of the industry to share information vital to the overall growth of the Nashville music and entertainment industry. NATD members foster camaraderie among “friendly competitors” which seems to be unique to the closely knit Nashville music and entertainment community. As part of its philanthropic program, NATD provides scholarship funds for students showing exemplary performances in academics, civic duties, and personal goals. This is the 26th year that aid has been granted. For more information, please visit www.n-a-t-d.com.